Manny Vasant, MBE, reports on the SAAD Concious Sedation in Dentistry course at St Bartholomew's Hospital on 5 and 6 June, 2003

The story of St Bartholomew's Hospital records the dream of a minstrel at the court of King Henry I in 1123 to relieve pain and misery in the city of London. Rahere's dream was fulfilled when the King decided to support him in building this hospital which came into being in that era and stands on the same site 800 years later fulfilling the same promise.

The Society for the Advancement of Anaesthesia in Dentistry, a dental charity, came into being in the late 1950s and continues the same theme to relieve pain and anxiety for patients in need of dental treatment. Their motto is "dolore vincto timore victo" Abolish Pain to Conquer Fear. It is befitting that several centuries later, the course to train dentists in Conscious Sedation techniques is run in this very premises. At the invitation of David Craig, the Course Director of SAAD, I went along to see what the course was about. Admittedly, though I have been a SAAD member for several years, IV sedation has never been my forte.

Most participants were happy with the antecubital fossae

I was impressed with what I saw. The training was for two days and unlike many courses which cater for masses (there were over 80 dentists and 60 dental nurses), there was no time wasting. Various speakers gave out a vast amount of information in a very digestible manner. Virtually all the speakers are eminent members of the SAAD, some of who have been members of the Expert Working Group on Standards in Conscious Sedation for Dentistry. The course started punctually and ran to time and the breaks were timely and well

The General Dental Council and the profession are just waking up to the concept of team training. SAAD has been ahead of the times- they have been running courses such as this one, for dentists and nurses, for decades.

For the whole sedation team 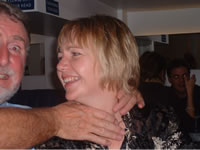 Others went for the jugular
The standards stipulated in formal documents state that "Education and training in conscious sedation needs to ensure that ALL members of the dental team providing treatment under Conscious Sedation have received theoretical, practical and clinical training before undertaking clinical practice". In keeping with this premise, once the aims and objectives of the course had been explained, the early speakers took us through the basic sciences. Local analgesia must underpin good Conscious Sedation practice and this was covered in some detail. The practical part included sniffing

As one would expect some participants were too reluctant to move on to the next part- venepuncture on each other! The technique used now (cannula) is much safer than when I first attended the SAAD course back in 1974 when we were taught to leave needles in the vein and strap the elbow to a flat board to prevent patient's from flexing their arm! Readers of this journal may have also read the August 2003 issue about The Vein Entry Indicator Device (VEID). This device confirms one's position in the vein by a system of audible bleeps . This additional reassurance is very welcome for a novice like me! 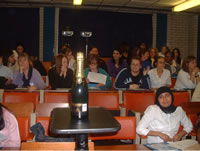 Nurses MCQs: bubbly for the winner! The SAAD course was enjoyed by the whole dental team
We were then taught to use patient monitoring devices such as pulse oximeter. Clinicians showed video recordings of different types of cases being treated in their practices. It was wonderful to see and learn new communications skills- who said you don't need any when you sedate your patients! There was also a lively and humorous session on medico-legal problems. Finally, there was final obligatory multiple-choice questions-though we were spared the embarrassment