It is no coincidence that since its inception some 14 years ago, there has never been a vacant place on this congress. Most of the thanks must go to Adrian Watkinson - the Congress Director and Chairman and Nigel Herradine, who is the co-organiser of this annual and well established event.

Both Adrian and Nigel are consultants at Bristol and how they find time to organise event remains a mystery. What is more, both of them are also regular speakers on the congress. Besides being able to pull the same audience year after year, they also manage get a very good mix of speakers (medical and dental) year after year. This is no mean feat. The interaction with our medical colleagues in such convivial environment puts a different perspective on CPD.

This year's meeting was held at the Ambassador Hotel, St Anton, Austria. The Faculty was made up of four speakers from the UK, each one of who had very kindly stayed on for the rest of the week preceding or following their lectures to spread their gospel to the delegates. They even accompanied us to the ski slopes in between the morning and the evening sessions. Adrian had to work hard to ensure that everyone finishes the hotel group discussions by 11 am. However, probably much to the annoyance of fellow non-medical/dental skiers, he has failed to be able to stop these discussions continuing in the ski lifts thereafter! This is a unique vehicle to deliver CPD, as in the close confines of a gondola or a chairlift you have to give your undivided attention! There is no escape! Having been a recent convert to tooth whitening, it was fascinating for me to observe fellow Brit's teeth against the snow-white background. We are taught about the three elements of shade matching – hue, value and chroma. When you looked at the teeth against this snow-white background, hue, which I learnt is the actual colour, ranged to orange to brown! The chroma (the amount of colour content) quite simply appeared to be dark brown or dark something or the other. Suddenly, the Vita guide appeared irrelevant. Unlike in a surgery setting there is no hope of any tooth picking up a value (brightness) of "1" against this super white background especially when there is bright sunshine. The point was made! You must never match your shade against such a white background. Apparently looking at a grey card or background does the trick. Then, quite unsurprisingly, I did not see any rush amongst the delegates to return to the grey skies in the UK!

I have yet to learn about the physiology of varied optical illusions and effects of different backgrounds on shade taking. At this time, I could not yet explain why one has to choose a grey background. However, it would not surprise me if Adrian has picked up the hint. I can see an ophthalmologist or an optician being invited next year to clarify this mystery!

Lloyd Searson, a Consultant at the Eastman Dental Hospital covered aspects of restorative dentistry including implants. He reminded us of that whilst soft splints are useful for TMD, soft splints may actually increase parafunctional activity by inducing "trampoline" behaviour. There was not a splint in sight so he was able to demonstrate the "trampoline" effect on a pair of long skis.

Paul King is also a Consultant in Restorative Dentistry. However, he was not going to confuse us with terms commonly associated with restorative dentistry, such as carvers and waxing- at a venue like this they take on a whole new meaning. He therefore resorted to the new growing field in dentistry- that of litigation. He clarified many of the issues regarding medical and dental negligence such as Bolam test, role and responsibilities of a dental witness and so on. It was obvious from the feed back that there is a need for this training and may be that the course organisers in the UK will take note of this.

Nigel Herradine, a Consultant Orthodontist and medic, had obviously found time to watch some television in the past few months, despite all his commitments. The much-publicised programme about extractions and the damage they may cause to our young orthodontic patients had hit newspaper headlines. Dentists will remember that this had resulted in many questions from the parents of children who had planned to have such a therapy. Nigel showed us many cases backed up with ample literature and clarified many of the questions that we had in our minds.

Too bright for a shade! 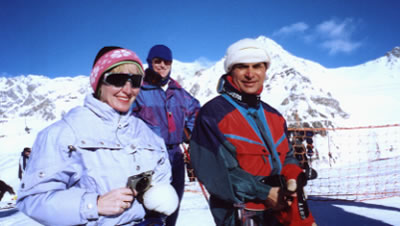 John Newman, Consultant Orthopaedic Surgeon is also an accomplished skier. He has however confined his speciality to the knees. Arthritis is not an uncommon problem not only amongst dental patients, but also, amongst dentists themselves. Those of us who mange to go skiing are not yet candidates for either unicompartmental replacement, nor for total knee replacement. Nevertheless, it was useful to know what your patients have go through and the causes of arthritis in the general population. It was reassuring to note that one week of skiing will not harm your knees as long as you do not fall over too often. The lesson to be learnt was that do not think too much about the lecture whilst skiing- concentrate on "benz your knees". The inevitable question about preoperative AB cover or not was discussed. The advice in the current DPF which, apparently is still valid.

The test: earning the points (or pints!) 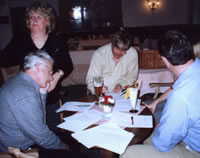 The final day is the mandatory test. You can see the tension on the ski slopes during the afternoon run and the rush to return to the hotel for the last minute revision! Admittedly, the examiners (the faculty) are very fair. The test is not intimidating and not intended to be a snapshot of your performance with an aim to fail you. The emphasis is on learning at your own pace. It is an assessment, not an examination. The faculty members will often end up teaching you again during the test. You also earn your pints (err points) during the test. What a nice way to obtain information! I would thoroughly recommend this sort of CPD.